Return to the Hawaiian Independence Home Page
or the ADB Page

Across from the Convention Center, Wednesday, May 9

By Lynette Cruz
(see images below)

We gathered around 8:30 am in front of the Rock-za Bar, across from the Convention Center. At first there were only about 20 of us, but by about 10 am 30 more people had arrived. Lots of media attention, as we were the only folks visibly demonstrating. Everyone else was at Ala Moana park waiting for the march to begin. Baron Ching brought four flags, including the very large Hawaiian flag. Media asked questions about why some flags were upside down (Richard Kinney's) and some right side up. I told them that if you believed your country was in distress, you would fly your flag upside down. If you believed otherwise, you wouldn't. If someone had brought an American flag, that one would have been flown upside down - hence the different flag orientations. Mel Kalahiki had a Hawaiian flag pinned to his kihei hanging top to bottom. We brought three banners with different messages: US Occupied Hawai`i, Hawaiian Kingdom - An Independent Nation since 1843, and www.HawaiianKingdom.org. Banners were funded courtesy of the People's Fund and Pacific Women's Network.

Media representatives from the local newspapers and television stations were everywhere. MSNBC interviewed Fran Orian and inquired about Makua and Vieques. Fran directed them to Kyle Kajihiro, from AFSC. Later, after the marchers passed in front of us, Fred Dodge and `ohana from Malama Makua arrived. A Chinese reporter (from Sing Tao newspaper?) did an interview in Cantonese, with Danny Li from People's Fund (holding our US Occupied Hawai`i banner) as interpreter. There does not seem to be a word for 'coalition' or 'alliance' translatable into Cantonese. Our friend, Stu Dawrs, recently retired managing editor for Honolulu Weekly, was inside the Convention Center attending some of the talks. He called us on his cell phone to tell us that the delegates riding on the escalators had a good clear view of all of us, our banners and signs, across the street. We were making an impact.

Cops were everywhere. Definitely overkill. We had our own cops... two local guys assigned to us. They might have been feeling kind of dumb, considering they were wearing aloha shirts and plastic orchid leis, with arm bands with HPD logo. But they were good natured and friendly, and assured us they didn't want the protesters or demonstrators to get hurt (I think they meant local folks). Every half hour or so fleets of cops in shorts would ride by on their bikes. There were plain clothes cops, security, ex-cops, prison guards, all kinds of people riding around on bikes in between people, in the crowd. Former Public Safety Director Keith Kaneshiro rode by a couple of times on a bike. Then there were cops in uniform on every corner. I think that the cops outnumbered us right up until the marchers came in. People (including plainclothes cops) were sitting along the walls, just milling around in general, or looking for ways to participate. Masa drummed, Karen Murray and friends blew the pu. We brought 500 brochures to hand out to passersby and they were gone before noon. The brochures pointed to the website. Baron brought 11 pu ohe (bamboo) which were distributed. When they were sounded all together, it was awesome.

Around 10 am, Bumpy sent Gordon over to invite Soli, Tom Anthony and me to meet with the kupuna from Maui, so we went to the Convention Center, past the guards, and greeted everyone. They were happy to see us across the street with our banners and signs.

Around 11 am, half of the crew, which was growing steadily, left for Ala Moana park. The plan was for kanaka to lead the march to the Convention Center, ask for permission to enter, then have us (those who remained) give them permission. Just about noon, Kaleikoa Ka`eo gathered everyone together to do pule. By then the crowd was fairly large, perhaps 30 of us joining hands, and another 50 people surrounding us. Ike Ka`aihue did pule, as did Kaleikoa, then we all moved to the middle of the street (which was closed off to traffic) to await the marchers. When they finally arrived chants requesting permission to enter were offered by Pi`ilani Smith and Baron Ching. Kaleikoa, Vicky Takamine and her son gave the marchers permission to enter. The whole process took perhaps 10 minutes, during which time the police and other security were concerned about what was happening because they didn't understand protocol. Finally the protocol ceremony was ended and the marchers moved forward. The truck in the front of the march carried drummers who continued drumming with a steady beat. While the marchers on the Convention Center side of the truck chanted for Chino to come out of the Center, demonstrators on the other side of the truck proceeded to have a street party, with drummers and everyone else dancing and shouting. The mood was high and festive on the one hand (and one side), and demanding of recognition and accountability on the other side.

Media covered Chino's brief meeting with protestors, and the reading of demands by Walden Bello. Marchers were scheduled to move on by 1:15 pm, which they did. Most of the demonstrators who had greeted the marchers on their arrival then joined in with the march and proceeded to Kapi`olani Park. 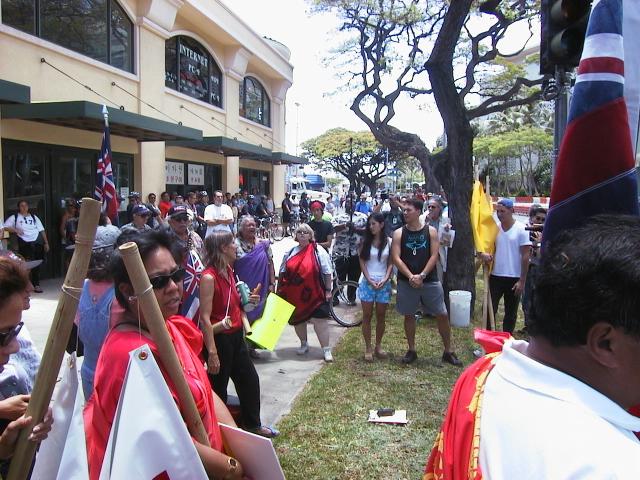 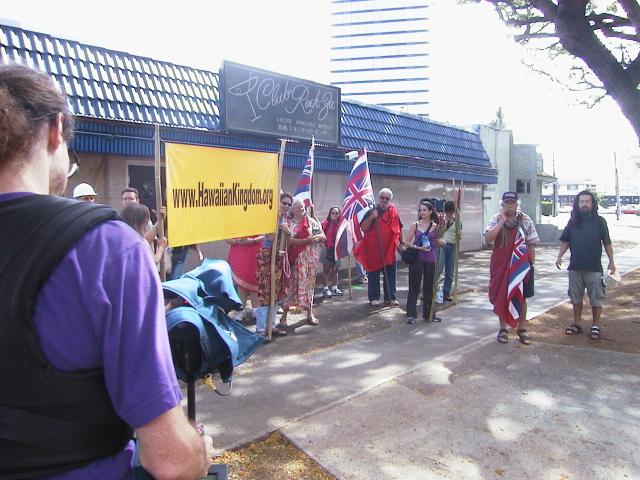 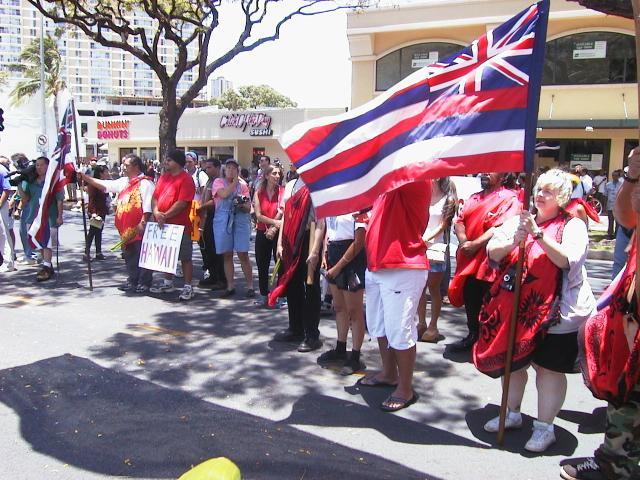 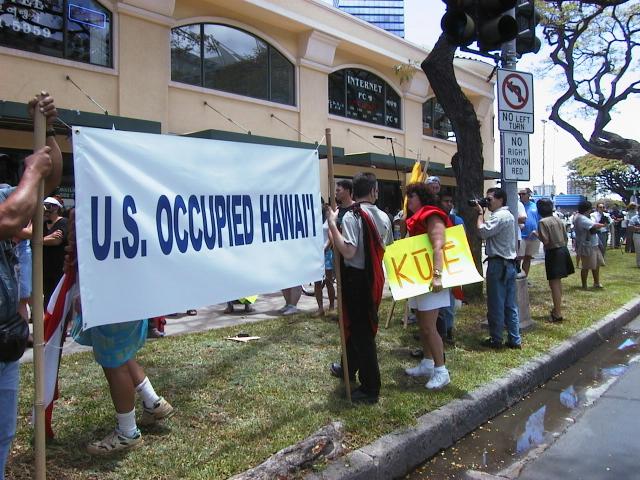 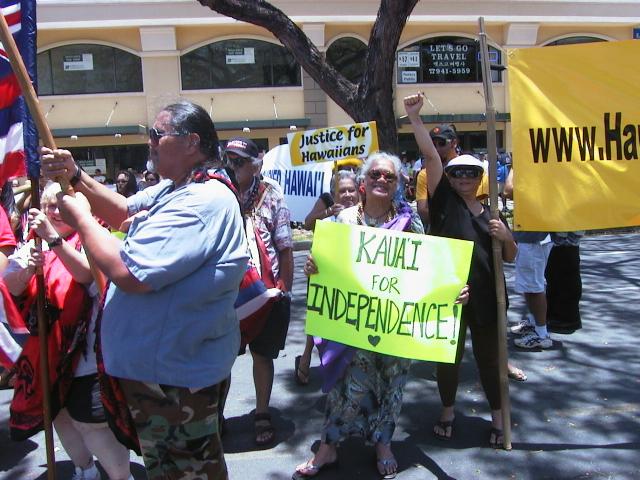 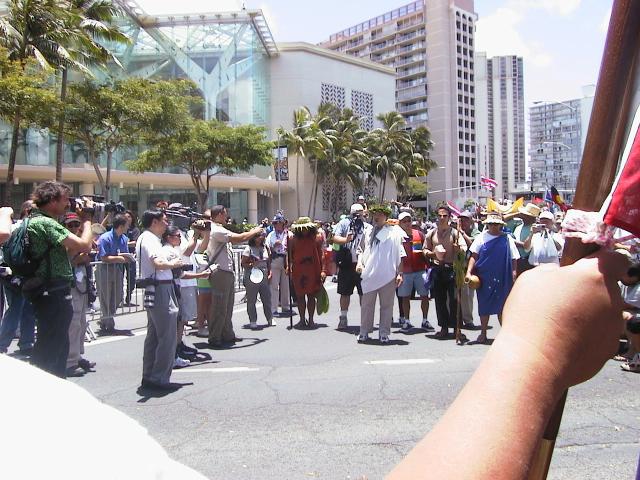 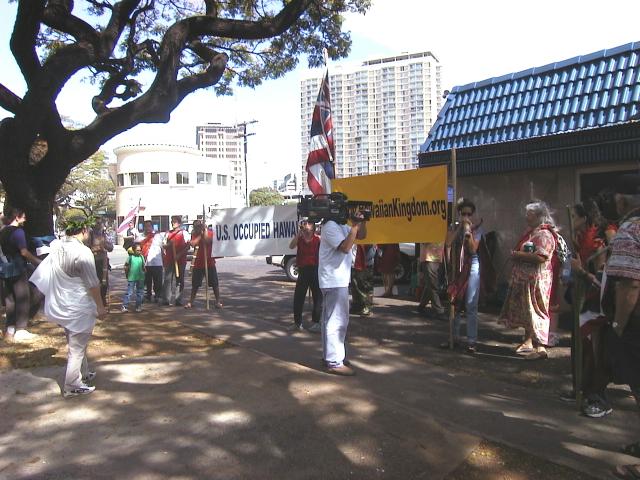 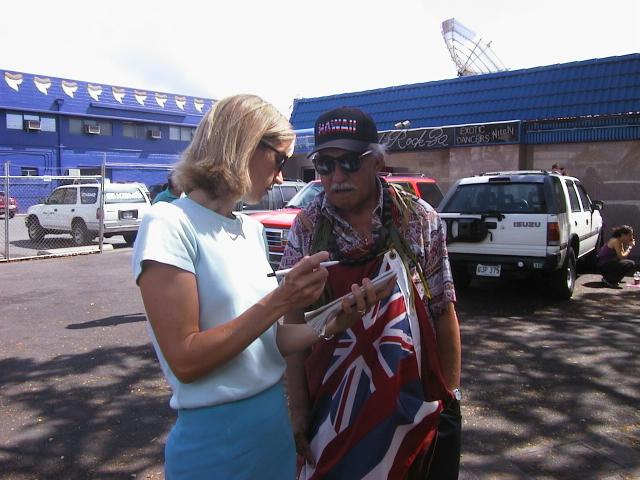 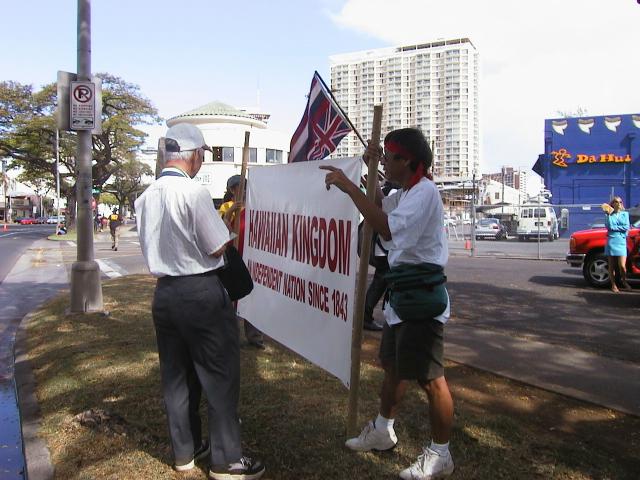 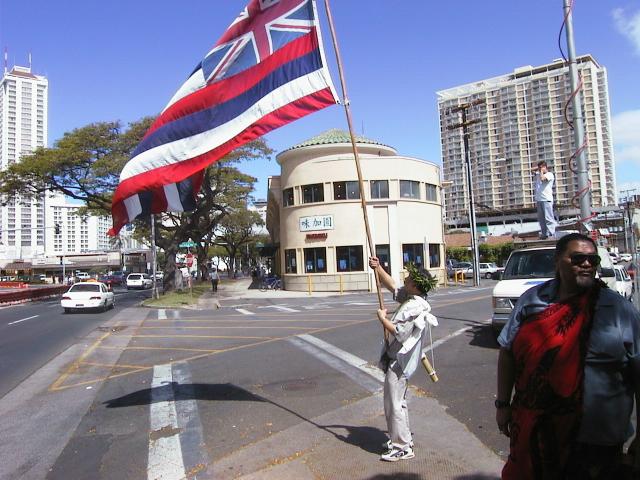 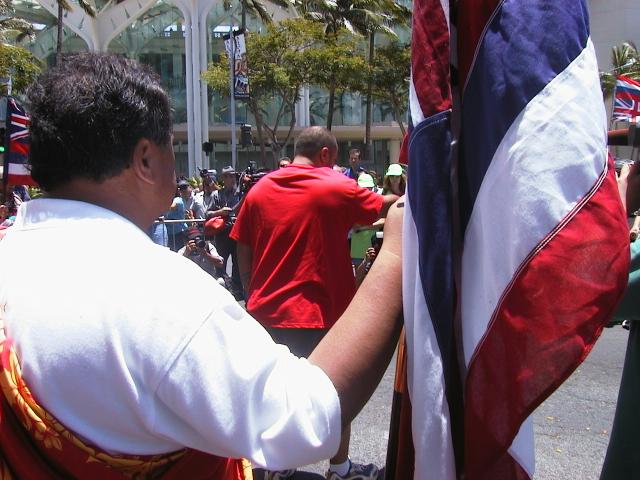 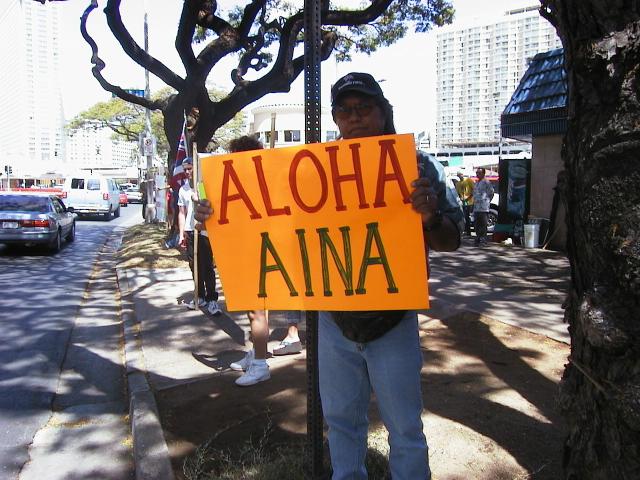 Return to the Hawaiian Independence Home Page or the ADB Page