A new video presentation on
"the annexation that never was." 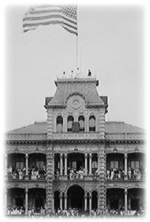 On August 12, 1898, during annexation ceremonies at 'Iolani Palace, two figures stood on a platform before an international gathering. Sanford B. Dole and US Minister Harold Sewall exchanged treaty ratifications annexing the Hawaiian Islands to the United States. Or so it appeared.

But was it really a treaty of annexation? And did Hawai'i really become a territory of the United States?

WE ARE WHO WE WERE is a fifteen minute video presentation that reveals the legal and historic background to what is commonly known as annexation. Using archival photos, film footage and historic quotes, the program tells the story of the concerted effort by Queen Lili'uokalani and her loyal Hawaiian subjects to defeat a treaty of annexation in the US Senate. Based on United States, Hawaiian Kingdom and international law, a compelling case is made for the fact that annexation never took place.

A co-production of The Hawaiian Patriotic League and Na Maka o ka 'Aina, the video is part of a public educational campaign to increase awareness of the true facts of Hawaiian history and sovereignty.