Return to the Hawaiian Independence Home Page, the Legal Index or the Policy Index

The upside-down flag of Hawaii, which was the flag of the Kingdom as well as the State, symbolizes a "nation in distress" and is a common sight in the islands today...

Is Hawaii Really a State of the Union?

[NOTE: The following essay discusses, as a basis for independence, how Hawaii illegally became a state in 1959, but it is important to keep in mind that Hawaii's independence was recognized via treaty by the United States (as well as all major nations of the world in the 19th century) and thus the situation with Hawaii is distinct from all other non-self-governing territories which were placed under Article 73 of the UN Charter. Hawaii should never have been a territory/colony of the United States, and it is not required to undergo a formal decolonization process at this time in order to restore independence. The illegality of the overthrow and annexation are well documented in the United State's own official apology, so the purpose of this essay is to counter the assumption that the 1959 statehood vote legitimized the United States' occupation of Hawaii.]

The following information provides an historical perspective on how Hawaii came to be integrated into the United States as a state of the Union, and the fact that this status is not and has never been legally valid.

Obviously America claims that Hawaii is part of their country, and most people, in Hawaii, on the 'mainland' and around the world, have tended to accept that as so.

The common understanding is that in 1959, a plebiscite was held in which the people of Hawaii voted to become a state of the Union, and on August 18, 1959, Hawaii was admitted to the Union.

What led up to this event?

In 1945, at the end of World War II, the United Nations was established. In the Charter of the UN, a special provision was made for certain areas of land, including Hawaii, which was placed under CHAPTER XI, DECLARATION REGARDING NON-SELF-GOVERNING TERRITORIES

"Members of the United Nations which have or assume responsibilities for the administration of territories whose peoples have not yet attained a full measure of self-government recognize the principle that the interests of the inhabitants of these territories are paramount, and accept as a sacred trust the obligation to promote to the utmost, within the system of international peace and security established by the present Charter, the well-being of the inhabitants of these territories, and, to this end:

a. to ensure, with due respect for the culture of the peoples concerned, their political, economic, social, and educational advancement, their just treatment, and their protection against abuses;

b. to develop self-government, to take due account of the political aspirations of the peoples, and to assist them in the progressive development of their free political institutions, according to the particular circumstances of each territory and its peoples and their varying stages of advancement;

e. to transmit regularly to the Secretary-General, for informational purposes, subject to such limitation as security and constitutional considerations may require, statistical and other information of a technical nature relating to economic, social, and educational conditions in the territories for which they are respectively responsible other than those territories to which Chapters XII and XIII apply."

So Hawaii, under Article 73, was a part of the UN system, and was placed under the administering authority of the United States, which, to reiterate, agreed to "develop self-government, to take due account of the political aspirations of the peoples, and to assist them in the progressive development of their free political institutions..." with "due respect for the cultures of the peoples concerned..."

Did the United States fulfill this "sacred trust obligation"?

Under Section (e) of this article, the United States was responsible to transmit information to the UN regarding Hawaii and the provisions of Article 73.

"Throughout the school system, the social studies programme aims at creating an understanding of American ideals and purposes, knowledge of American history and government, practice and principles of citizenship...."

Self-government? Due account of the political aspirations of the people?

At one point, a former territorial senator, Alice Kamokila Campbell, filed suit to halt the spending of public funds to "propogandize and subsidize" the Hawaii statehood campaign. She said, as quoted in a Honolulu Advertiser article, "the illegal expenditures are to the detriment of citizens and taxpayers opposed to statehood ... Moneys are now being expended for liquor, luaus, dinners, entertainment and other purposes and objectives contrary to law ... the acts and conduct are of a purely political nature."

It is important to consider two central questions:

The question on the ballot (see below) was:

"Shall Hawaii immediately be admitted into the Union as a state?"

Yes or No? Become a state, or remain a territory?

Why was the option of independence not on the ballot? Did Hawaii not have the option to become an independent country in 1959? In fact it did.

The document guiding the process for removal of territories from the List of Non-Self-Governing Territories was UN Resolution 742 (VIII). "Factors which should be taken into account in deciding whether a Territory is or is not a Territory whose people have not yet attained a full measure of self-government."

This resolution stated: "...the manner in which Territories... can become fully self-governing is primarily through the attainment of independence..."

One year after Hawaii's "plebiscite" vote, on 14 December 1960, the UN General Assembly passed Resolution 1514, Declaration on the Granting of Independence to Colonial Countries and Peoples. This resolution includes the following passages:

All peoples have the right to self-determination; by virtue of that right they freely determine their political status and freely pursue their economic, social and cultural development.

Inadequacy of political, economic, social or educational preparedness should never serve as a pretext for delaying independence.

Immediate steps shall be taken, in trust and non-self- governing territories or all other territories which have not yet attained independence, to transfer all powers to the peoples of those territories, without any conditions or reservations, in accordance with their freely expressed will and desire...

These UN resolutions clearly indicate that independence was not only an option at the time, it was the primary option under international principles and the fundamental inalienable right to self-determination, and specifically with regard to non-self-governing territories under article 73 of the UN Charter.

Not only was the option of independence not on the ballot, it was not even discussed, while statehood was actively propogandized with public funds, and American political ideals were indoctrinated through the schools.

In truth it was the United States' obligation to fully inform the Hawaiian people and assist in the attainment of the goal of independence, not to extend their manifest destiny thousands miles across international waters.

The United States government did not uphold their "sacred trust obligation."

The vote for statehood was not a valid exercise of self-determination and decolonization and has no validity in international law.

Any U.S. citizen who had resided in the islands for a year was allowed to vote, which included large numbers of American military servicemen and their families, who were essentially the occupation force that had illegally held Hawaii since the admittedly unlawful annexation in 1898.

The island of Ni'ihau, which was almost totally Native Hawaiian, and was relatively free from the propoganda of statehood, voted overwhelmingly against statehood, as did the island of Lana'i.

In 1993 Congress and the President decided they had something to apologize for. Most of Public Law 103-150 deals with the events of the 1893 overthrow and the 1898 annexation. But one important clause relates directly to 1959 and the present:

"the indigenous Hawaiian people never directly relinquished their claims to their inherent sovereignty as a people or over their national lands to the United States, either through their monarchy or through a plebiscite or referendum." (emphasis added)

"Inherent" means a birthright, given by Akua, that no one can take away.

"Sovereignty" means total authority and control over land and natural resources, and is virtually synonymous with independence under international law.

Sovereignty (partial definition):
"The supreme, absolute, and uncontrollable power by which any independent state is governed; supreme political authority; the supreme will; paramount control of the constitution and frame of government and its administration; the self-sufficient source of political power, from which all specific political powers are derived; the international independence of a state, combined with the right and power of regulating its internal affairs without foreign dictation; also a political society, or state, which is sovereign and independent."
- Black's Law Dictionary (Sixth Edition)

In other words, the United States Congress and President have acknowledged that the Hawaiian national population still maintains their birthright to control the land and natural resources of all of Hawaii as an independent country, despite the statehood vote.

Interpreting the above-quoted clause of the Apology Resolution, international law Prof. Francis A. Boyle (Univ. of Illinois College of Law) stated on Dec. 28, 1993, before the state's Hawaiian Sovereignty Advisory Commission:

"Congress is effectively conceding now that the (1959 statehood) vote is meaningless, as a matter of international law and United States domestic law. So you're not bound by it. Rather I'm suggesting you're now free to determine your own fate pursuant to the principal of self-determination."

America gained possession of Hawaii through a succession of illegal acts, in 1893, 1898, and 1959, and has admitted to the fact of these crimes. Hawaiian national sovereignty has never been extinguished. Essentially, the country of Hawaii is currently illegally occupied by a foreign military power.

The statehood vote, both in terms of the question asked and the people who were allowed to vote, was in no way a valid act of self-determination, and did not legitimize the occupation. Hawaii has never legally been a state of the United States.

The option of independence for Hawaii exists to this day, and the voices supporting this option are growing steadily. 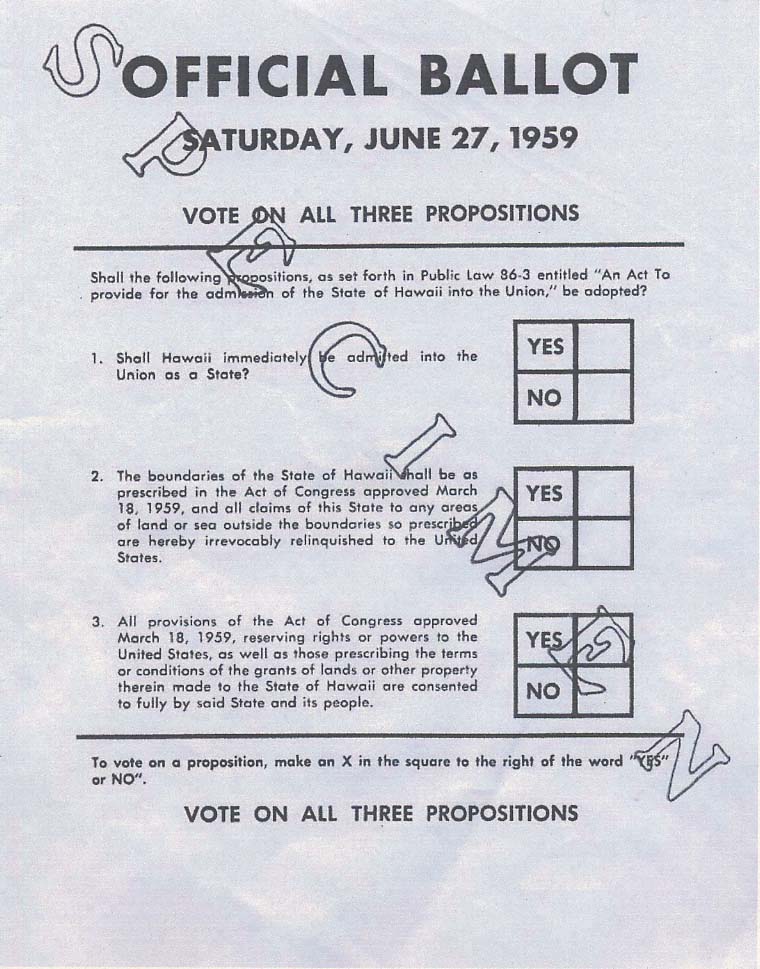 Return to the Hawaiian Independence Home Page, the Legal Index or the Policy Index