Return to the Hawaiian Independence Home Page, or the News Articles Index 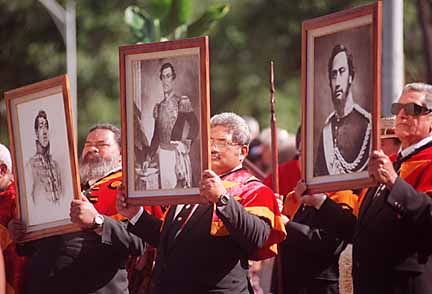 Spiritual leaders of native Hawaiians called their people together at the steps of Iolani Palace today in an effort to unite and move forward.

Various Hawaiian groups offered chants and blew conch shells as they approached the palace steps in ceremonies that marked 100 years since the day Hawaii was annexed by the United States.

Thomas Cummings, 11, from Ewa Beach, sat quietly and carefully watched the ceremonies. He held a conch shell tightly in his hand.

"We're fighting for our rights, all kinds," Cummings said.

"I think its pretty good," said Kaliko Keahilihau, 21. Finishing his sentence, his younger brother Ekona Ravey, 15, said, "all the people can come together."

Although there has been some anger about the way Hawaii was taken over, Keahilihau said, there was nothing but pride today. 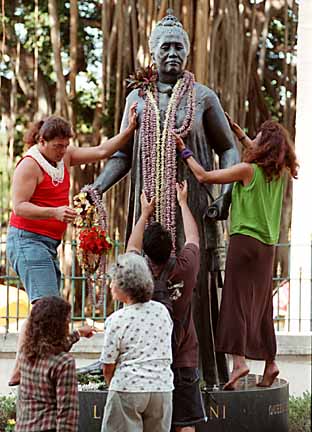 By Ken Ige, Star-Bulletin
From right, Luana Kaaihue, Keoki Makaio and Kalani Ryder,
pay tribute to Queen Liliuokalani by draping her statue - located
between the Capitol and Iolani Palace - in purple crown flowers.
The blossoms were the queen's favorites.

"It's good to hear the language spoken and to see non-Hawaiians supporting us," said Ravey.

Police had no estimates of the number of people who attended today's events, although they said more than two dozen extra police officers were on duty to help with traffic and crowd control. About 30 volunteer security guards from the Nation of Hawaii were also scattered around the march.

Haililani Burgess and his 7-year-old daughter, Mahealani, reverently approached the statute of King Kamehameha and tossed water carried from Nuuanu, then they slowly backed away from the statue bowing.

Burgess said that Kamehameha is his ancestor.

"My daughter is a future heir," Burgess, 47, said. "I hope she attains the responsibility and duties and knowledge to become a leader, and if not, a good follower of Hawaiian lineage and culture."

Many other Hawaiian families left leis and gifts at the Kamehameha statue as well.

By Ken Ige, Star-Bulletin
Frenchy DeSoto, chairwoman of the Office of Hawaiian Affairs,
in a wheelchair, weeps as she makes an offering to the portrait
of Queen Liliuokalani at Washington Place.

Halani Berard, 60, representing 120 members of the Kona Hawaiian Civic Club, gathered flowers from the Big Island to leave at the statue and burial grounds of past Hawaiian alii.

She carried an inverted Hawaiian flag to "show the world our nation is in distress. I pray I live long enough to see all the injustice of the past corrected."

Reynolds Kamakawiwoole, 50, from the Big Island said he was walking in peace. "To begin a new era for Hawaiian people and to control our destiny and to start anew, we must forgive."

Friends since high school, two Hawaiian and one missionary descendant went to the festivities together.

Now in their 50s, the women said they represent forgiveness.

"My people overthrew the kingdom, but we didn't do it," said Laurel Douglass of Maui, a missionary descendant whose family goes back five generations in Hawaii.

By Ken Ige, Star-Bulletin
Halealoha Ayau of Molokai, right, and Kunani Nihipali
of Oahu's north shore, advocate independence for Hawaii
as they and other marchers carry signs past the state Capitol

Today is the first time Hawaiians can vocalize their feelings and let them go, said Kehau Kea of Honolulu.

"The past is sad; the future holds promise," Douglass said.

"Without the past there is no future," said Joanne Kahanamoku-Sterling of Maui.

Kahanamoku-Sterling said that they came to respect the 100 years and represent her family and the people of her culture. "It's in support of all the people of Hawaii."

Hawaii is an emerging nation, Douglass said. "You can feel the spirit. It's a good feeling."

Kahanamoku-Sterling added: "It's a healthy feeling. It's important to forgive. This is the time to forgive, but we have to know what to forgive."

One hundred years ago was the saddest day for Hawaii, Douglass said. But today there are no battles, she pointed out. "We're all together."